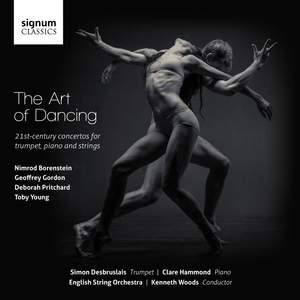 Offer, The Art of Dancing

The disc’s title work, composed by Toby Young, is a playful reimagining of the Baroque suite…Young’s score conjures gorgeous sonorities, particularly in the string writing, and is matched by... — BBC Music Magazine, January 2018, More…

Young, Toby: The Art of Dancing

I. The Grand Mine

Simon Desbruslais returns to disc on Signum with an album that continues to expand the repertoire of the trumpet even further, with four new commissions for trumpet, piano and string Orchestra.

Toby Young’s 'The Art of Dancing' is described by the composer as being "a modern homage to the baroque dance suite", drawing inspiration from modern dance music styles including Acid House, Garage and Drum & Bass. Geoffrey

Gordon’s 'Saint Blue' is inspired by the visionary artist Wassily Kandinsky, creating a double concerto with a remarkable jazz-inspired cadenza featuring trumpet, piano and double bass. Deborah Pritchard’s 'Seven Halts on the Somme' responds to the series of oil paintings by artist Hughie O’Donoghue that depicting seven stopping points for British troops during the Battle of the Somme, one of the most bloody conflicts of the First World War. Finally, Nimrod Borenstein's’ 'Concerto for Piano, Trumpet and String Orchestra' juxtaposes rhythms to create a multiplicity of different atmospheres in this highly effective and powerful work.

For these première recordings Simon Desbruslais performs with pianist Clare Hammond, accompanied by the English String Orchestra under Kenneth Woods.

The disc’s title work, composed by Toby Young, is a playful reimagining of the Baroque suite…Young’s score conjures gorgeous sonorities, particularly in the string writing, and is matched by spritely, lyrical performances from Desbruslais and pianist Clare Hammond…A sparkling exploration of cross-rhythm, Borenstein’s Concerto for Piano, Trumpet and Strings concludes this beautifully performed, highly original disc.

The solo playing from both Desbruslais and Hammond combines confidence and assertiveness with tact and grace… Desbruslais draws a rich collage of tints from his instrument which do seem to reflect the art that inspired the music.