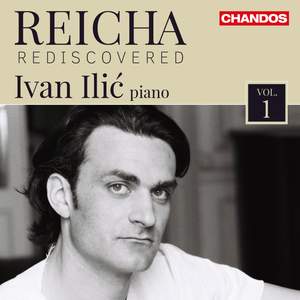 Capriccio is highly capricious, and Fantasie sur un seul accord is simply that: it’s a tribute both to Reicha and to Ilić that this extraordinary exercise in harmonic self-denial is anything... — BBC Music Magazine, December 2017, 5 out of 5 stars More…

No. 4, Fantaisie sur un seul accord

The Serbian-American Paris-based pianist Ivan Ilić has signed a new multi-album recording contract with Chandos Records, following internationally acclaimed recordings of works by Godowsky and Feldman. His first project on the label is a series devoted to the solo piano works of the Czech composer Antoine Reicha, a contemporary and lifelong friend of Beethoven.

Although best known for his contributions to the repertoire for wind quintet, Reicha wrote vast quantities of solo piano music, most of which has never been recorded. The manuscripts, preserved in the Bibliothèque nationale de France, were published only recently.

Offering premiere recordings of the Grande Sonate in C major, the Sonata in F major, and three excerpts from Practische Beispiele, this first volume confirms Reicha as an authoritative, singular voice, whose piano works complement and enrich our understanding of Haydn and Beethoven. Volume 1 is a coproduction of Chandos, RTS (Swiss Radio), and the Palazzetto Bru Zane – Centre de Musique Romantique Française in Venice.

Capriccio is highly capricious, and Fantasie sur un seul accord is simply that: it’s a tribute both to Reicha and to Ilić that this extraordinary exercise in harmonic self-denial is anything but boring…All these pieces deserve to be incorporated into today’s recital repertoire.

This first volume in a new series devoted to the piano music is an exciting development in rehabilitating this once famous and important figure. Ilić’s playing is wonderfully attuned to the style and content of the music and Chandos’ sound is superb. Highly recommended.

Ilić intersperses startlingly original fantasias with two sonatas, one built entirely around a theme from Mozart’s Magic Flute. It’s perhaps a little too academic for one sitting, but individually the works hold a genuine fascination.

Illić’s playing is wonderfully attuned to the style and content of the music and Chandos’ sound is superb. Highly recommended.

Ivan Ilić’s playing exudes technical brilliance and warmth in equal measures; the dominant impression is of a pianist keen to share this extraordinary music with a wider public. The affection is palpable. Chandos’s rich sound is impressive, and further volumes are promised. A winner.

Beautifully recorded- the sound warm and clear- this is an ear-opening compendium that reveals Reicha as a composer who makes the piano sing.