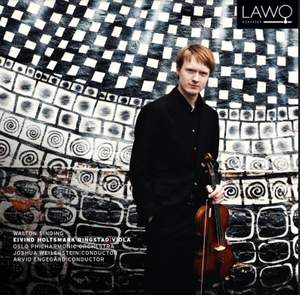 Written at the suggestion of Beecham, the Walton viola concerto remains underplayed to this day, and Holtsmark Ringstad makes a powerful, confident case for it, nimble in the central Vivo, e... — Classical Music, January 2018, 4 out of 5 stars More…

Viola player Eivind Holtsmark Ringstad is the latest talent to emerge from a new, golden generation of Scandinavian musicians. He made his debut with the Oslo Philharmonic Orchestra with conductor Eivind Aadland in 2013, and has since been travelling all around the world, performing in prestigious festivals and concert venues; he is a national favourite.

In 2016 he was chosen to join the world’s most prestigious training programme for experienced classical musicians: the BBC’s New Generation Artists Scheme. This has led to performances with BBC Symphony Orchestra, BBC Orchestra of Wales, BBC Northern Ireland, as well as performances with London Sinfonietta.

Christian Sinding is one of the few Norwegian composers of the nineteenth and early twentieth centuries who gained recognition with their music outside their native country. Unlike Edvard Grieg, Norwegian folk-elements are not prominent in his richly contrapuntal post-Wagnerian orchestral style. Coupled here with William Walton's Concerto for Viola and Orchestra, this is a welcome addition to the catalogue and the Oslo Philharmonic Orchestra's recordings.

Written at the suggestion of Beecham, the Walton viola concerto remains underplayed to this day, and Holtsmark Ringstad makes a powerful, confident case for it, nimble in the central Vivo, e molto preciso, gentle in the first movement (superbly ruminative at times) and locating the open-air aspect to the finale. The coupling is Sinding’s Suite in the Old Style, heard here in a nicely expressive performance.