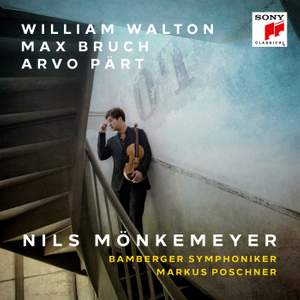 Nils Mönkemeyer has been hailed as one of the leading violists of his generation. For this recording, Nils has selected four of his favourite works by Walton, Bruch and Pärt and is joined by the Bamberg Symphony Orchestra under the direction of Markus Poschner. The Viola Concerto by Sir William Walton (1902–1983) showcases traditional English tone, enhanced by the sounds and rhythms of jazz. The German composer Max Bruch (1838–1920) is represented by two Romantic works, Kol nidrei, the original cello part of which acquires a unique timbre in Nils Mönkemeyer’s arrangement for the viola, and the Romance for viola and orchestra. The fourth and final major work included here is Fratres by Arvo Pärt (*1935). Although published in 1977, it had to wait until 2008 to be heard in its version for viola, string orchestra and percussion.

Walton’s vibrant Viola Concerto is best heard in his final, pared-down 1961 scoring. That’s the choice of viola player Nils Mönkemeyer and conductor Markus Poschner, whose wonderfully clear account is gilded by the Bamberg Symphony Orchestra’s spangled brass and refined winds. The German virtuoso lavishes affection on the opening Andante commodo, bringing out all its sensuous melancholy in one, long-breathed utterance.