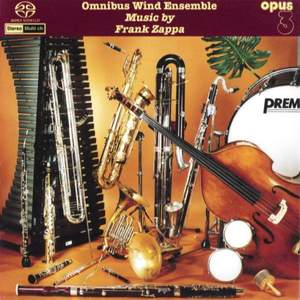 Zappa, Frank: How Could I Be Such A Fool

The Omnibus Wind Ensemble's interest in Frank Zappa's music dates back to the beginning of the 1980s, almost from the very beginning. Under the motto "From Mozart to Zappa", which also became the title of their first, widely acclaimed CD under the Opus 3 label, they have had many of Frank Zappa's compositions on their repertoire over the years.

The music of Frank Zappa has always defied classification, and those who have not studied it closely perhaps do not realize how much jazz and classical music it contains. (Zappa composed a percussion piece when he was only 15!) Arguably, Frank Zappa is one of this century's most interesting composers and perhaps the best kept musical secret in the USA.

The Omnibus CD "Music By Frank Zappa" is a grand tour of his music - from the beautiful "Peaches En Regalia", the highly complex "Revised Music For A Low Budget Orchestra", the outstandingly humorous "Brown Shoes Don't Make It" to the jazz-bluesy introduction etc. of "Inca Roads", with all the fireworks that follow it!

Also included are: How Could I Be Such A Fool, Let's Make The Water Turn Black, The Black Page No 2, No 7, Igor's Boogie, Be-Bop Tango, Alien Orifice, Dog Breath Variations, Uncle Meat and Sinister Footwear and 2nd Movement. The CD ends with a piece which was not written by Frank Zappa, namely Maurice Ravel's "Bolero" here in a big-band-influenced special arrangement inspired by Zappa's own version from 1988. Classical, Jazz or Rock!?