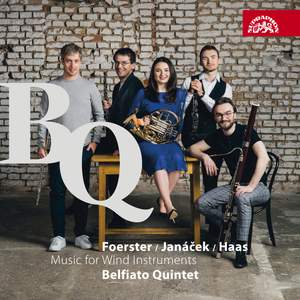 Recorded in the Church of Evangelical Church of Czech Brethren in Prague - Vinohrady, 10 - 14 Februrary, 2017.

The Belfiato Quintet are yet another exciting Czech chamber ensemble active in the international arena. The members of the young wind quintet perform with renowned orchestras (the Czech Philharmonic, the Philharmonia Orchestra, etc.), and both as individuals and collectively have garnered accolades at competitions (Kateřina Javůrková’s victory at the ARD Munich, first prize for the Belfiato Quintet at the competition in Semmering, Austria, etc.). The debut studio album, which they have recorded 12 years after the ensemble’s foundation, exclusively features Czech music dating from the first half of the 20th century. J. B. Foerster composed the Wind Quintet (his most frequently performed instrumental piece) in 1909 to commission for a virtuoso ensemble formed by the members of the Wiener Philharmoniker. The work by Janáček’s pupil Pavel Haas, written two decades later, bears traces of inspiration by folk music, Janáček, as well as Stravinsky. Leoš Janáček had created his wind sextet Youth just five years previously. Owing to the music teeming with joie de vivre, prevailing over languor and melancholia, one is hard pressed to believe that the artist was 70 years of age when he composed it. Youth – how apt for the Belfiato Quintet, an ensemble sparkling with energy and inspiration!

Three fascinating and rewarding works performed with supreme skill and musicianship by this Czech ensemble.