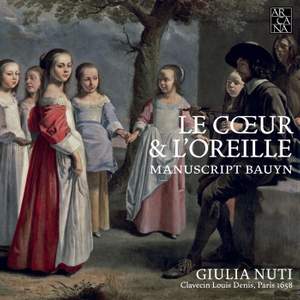 This is a lovely recording of part of one of the most important of all sources of French harpsichord music, one in which Giuia Nuti in both her playing and notes excels. — MusicWeb International, September 2017 More…

Froberger: Toccata in A minor

The Bauyn Manuscript, a key collection of seventeenth century harpsichord and other music, displays the influence of various schools of composition on the writing and performance of the great clavecinistes {trans: harpsichordist} of the mid- seventeenth century. The recording includes works of Chambonnières and Louis Couperin, displaying their different styles which led Le Gallois (1680) to write that «one touched the heart and the other touched the ear», as well as other contemporary composers such as Hardel and d’Anglebert. The Denis harpsichord of 1658 is the extraordinary protagonist of this recording, in which Giulia Nuti explores the expressive capacities of one of the earliest extant French double-manual harpsichords, displaying how instrumental refinement enables performance choices. The approach is that of Giulia Nuti’s award-winning first solo recording of eighteenth -century French harpsichord music, Les Sauvages, recorded on the Taskin of 1788, which received a Diapason d’Or. Hearing this music through the voice of the Denis harpsichord accesses the sound world in which these pieces belong and should be understood.

This is a lovely recording of part of one of the most important of all sources of French harpsichord music, one in which Giuia Nuti in both her playing and notes excels.

Sensitively responding to a restored 1658 harpsichord, Nuti allows this limpid music — two suites by Couperin and two by Chambonnières, alongside shorter works — the space it merits, combining scholarliness and style with interpretative freedom.

The instrument, unequally tuned and at low pitch, works with the repertory and the performer to reveal a vanished sound world, and in Chambonnières’s wonderfully eloquent Chaconne and Louis Couperin’s noble Passacaille you feel in touch with another civilisation.