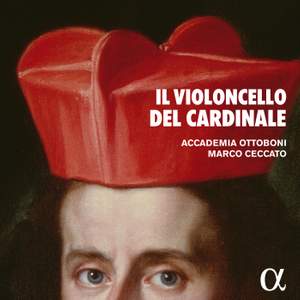 Perroni: Sonata No. 2 in D major

Perroni: Sonata No. 1 in A Major

Bononcini, G B: Cello Sonata in A Minor (Arr. for 2 Cellos & Basso continuo)

Cardinals Benedetto Pamphili and Pietro Ottoboni played a prominent role in Rome at the turn of the seventeenth and eighteenth centuries with their patronage of the three most important composers of the day, Corelli, Alessandro Scarlatti and Handel. At that time, numerous musicians converged on Rome, and the large orchestra directed by Arcangelo Corelli at the church of San Luigi dei Francesi included several famous cellists, among them G. L. Lular, N. F. Haym, F. Amadei and G. M. Perroni. As well as notable virtuosos, these men were often also composers of oratorios, vocal music, and pieces for their own favourite instrument, though very few of these have survived. It is to their music, often unpublished, that Marco Ceccato and his Accademia, winners of a Diapason d’Or of the year in 2015, introduce us here, along with works by the composers who subsequently formed the core of this group after Handel left for London: G. Bononcini, P. G. P. Boni, and G. B. Costanzi, who was later to teach Boccherini.