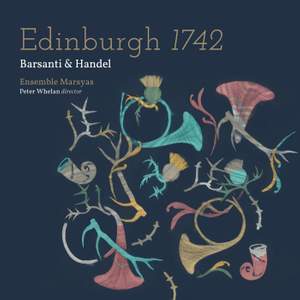 Under the incisive direction of Peter Whelan, the group is on ebullient form as it explores the vogue for the French horn in Scotland…Barsanti emerges as a worthy rival to Handel’s festive verve…Renard’s... — BBC Music Magazine, November 2017, 4 out of 5 stars More…

Barsanti: The Birks of Invermay

The popular Ensemble Marsyas returns with a diverse programme to be launched at the 2017 Edinburgh International Festival of concerti, wind music and Scottish songs by composers Francesco Barsanti and George Frideric Handel, centred around the music composed for The Edinburgh Musical Society.

The Edinburgh based chamber group comprises the best of a new generation of musicians specialising in early music across Europe. Ensemble Marsyas’ previous recordings of Zelenka, Fasch and Handel each received several five star reviews.

Peter Whelan is the founder and Artistic Director of Ensemble Marsyas and is in constant demand as both a performer and director.

Under the incisive direction of Peter Whelan, the group is on ebullient form as it explores the vogue for the French horn in Scotland…Barsanti emerges as a worthy rival to Handel’s festive verve…Renard’s fiery performance of Handel’s aria ‘Sta nell’Ircana’ from Alcina completes an assured disc of horn-infused Baroque finery.

In the expert hands of Ensemble Marsyas and their horn players Alec Frank-Gemmill and Joseph Walters, [the Barsanti concerti] turn out to be works of enormous joy and spirit. Their sound world will be familiar to many from Handel Water Music, [though] the chortling energy Barsanti conjures in his allegros has an abandonment that might have been a bit too boisterous for a royal river party.

It might look at little esoteric on paper, but this reconstruction of a typical Edinburgh Musical Society concert in the mid-eighteenth century is brought off with captivating brio from all involved, with delightfully boisterous contributions from horn soloists Joe Walters and Alec Frank-Gemmill.

Peter Whelan and his terrific Ensemble Marsyas reconstruct a typical society concert and it’s a rich insight, played with great style and charisma.