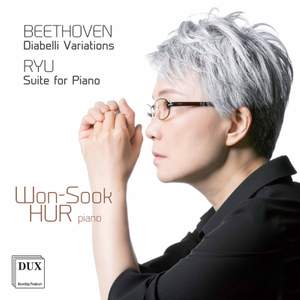 Suite for Pianoforte: I. Fugue No. 1 (Introduction)

Suite for Pianoforte: IV. Fugue No. 2

Suite for Pianoforte: VI. Fugue No. 3

Whoever studies to be a pianist or guitarist has struggled at one point with a musical score by Anton Diabelli. Still well-known today as a composer of short teaching pieces, he was famous in his time for religious music. Maybe most importantly, he was one of the great publishers of his time, and contributed to the renown of Haydn, Mozart and Schubert. Published in 1823 as Opus 120, Beethoven’s Diabelli Variations are the highlight of his piano works. These variations are paired with Suite for Piano by South Korean composer and pianist Jeajoon Ryu. Won-Sook Hur is one of the most well-known pianists in Korea. Critics have said her playing sounds like “smooth waves.” After completing her degree from the College of Music at The Seoul National University, Korea, she went on to receive a degree from the Universitat fur Musik und darstellende Kunst in Wien, Austria. During her studies in Vienna she won several prizes, including first prize in the Valsesia International Piano Competition. Since 2014 she has released albums exclusively for DUX, which have included works by Rachmaninoff, Frank, Lee (world premiere recording), Ravel, Beethoven, and Ryu (world premiere recording).