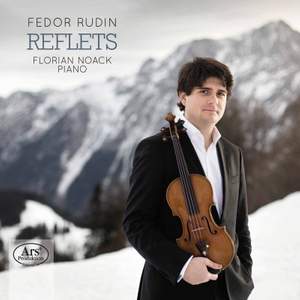 Violin Sonata No. 1 in B Minor, Op. 15: I. Allegro non tanto ma appassionato

Fauré: Romance in B flat major for violin & piano, Op. 28

Fedor Rudin writes of his new release: “We chose the title of this recording, REFLETS, for two reasons: firstly, because all works of art are connected in one way or another, make reference to each other in various ways or because they share a common tradition. Ravel, for example, was Faure’s composition pupil, who in turn was Lili Boulanger’s piano teacher; Catoire was influenced by Wagner, but when listening to his violin sonata, the first thought that comes to mind is: “This is the Sonata that Rachmaninoff should have written!” even though Rachmaninoff lived after Catoire. In that sense, art is a reflection of our past while pointing towards the future; the interpreter turns into the composer’s reflection during the performance. The second meaning is related to our personal histories, to the so called origin-based traditions and the reflections on culture that result from them, something I am most familiar with as someone who was born in Russia and brought up in France. These reflections had a considerable influence on our selection of Russian and French works on this recording: one sonata and two miniatures each, which belong together, as well as two separate pieces, one from Russia and one from France.” Franco-Russian violinist Fedor Rudin, a prize-winner of renowned international violin competitions including the Henri Marteau, Rodolfo Lipizer and the Aram Khachaturian competitions, is quickly establishing himself as one of the most exciting and gifted soloists of today. Born in 1992 into a family of musicians, Fedor Rudin is the grandson of Russian composer Edison Denisov. Fedor Rudin studied with Larissa Kolos, Miroslav Rusin, Svetlin Roussev, Zakhar Bron and Pierre Amoyal. He plays the 1680 Paganini-D’Annunzo Stradivarius, thanks to a generous loan from the Rin Collection in Singapore.