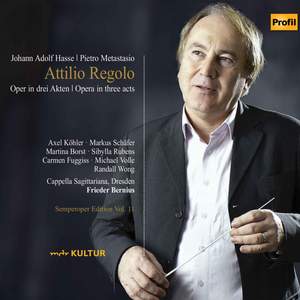 Documenting a period-instrument performance from Dresden, this live recording conducted by Frieder Bernius presents a good account of a worthwhile and otherwise unrecorded piece. — BBC Music Magazine, July 2018, 4 out of 5 stars More…

Hasse and his wife Faustina travelled to Paris in 1751 in response to an invitation from the French Dauphine Maria Josepha (born Princess of Saxony and Poland), and both won great acclaim there. Hasse also acquired knowledge there that would influence his future instrumental composing; Dresden Music Festival audiences who heard his Artemisia (1994) and still more his Olimpiade (1992) have experienced the wealth of tone colour that he was able to deploy. Attilio Regolo, Hasse’s last opera in his old style, is characteristic of his middle period and at the same time a key work. Eschewing ensemble pieces and with sparing use of the chorus, the work offers a string of sparkling arias, even if there is still little use of obbligato wind instruments. The most impressive feature of the arias is their wonderfully expansive vocal cantilenas, which largely ignore the nominal framework of a fouror eight-bar structure. We here encounter the aria as an individual work of art in Hasse’s Gesamtkunstwerk. More than in many other operas by Hasse, skilled singers and orchestra are needed in order to display the work’s full beauty, particularly in deploying additional diminutions and ornaments to make the da capo, the final repeat of the opening section, the true climax of each aria.

Documenting a period-instrument performance from Dresden, this live recording conducted by Frieder Bernius presents a good account of a worthwhile and otherwise unrecorded piece.

Volle, now well known in Wagner and Strauss, is by no means overpowering in the role of Licinio...but the most winning performance comes from Carmen Fuggiss's fresh-voiced Barce. The Cappella Sagittariana Dresden play springily for Frieder Bernius.