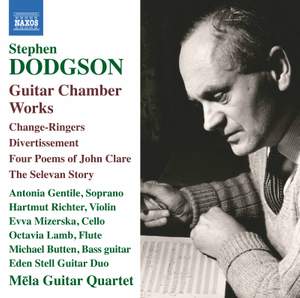 Divertissement: VI. Wherever Next?

The Selevan Story: I. Prelude (On the Rocks)

The Selevan Story: V. Concertino (Two Fish on One Hook)

Stephen Dodgson’s work embraced a wide variety of genres but, encouraged by Julian Bream in the 1950s, he became one of the most prolific and respected 20th-century composers for guitar. Including a premiere recording of the ingenious Change-Ringers, the chamber works on this recording make use of a fascinating palette of tonal colours, taking us on an unconventional and often witty journey of rhythmic excitement, serenity, dissonance and beauty.