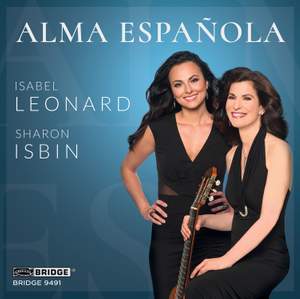 Voice and guitar may be a natural combination for the passions and colours of Spanish song, but rarely have they sounded as vivaciously, seductively idiomatic on disc…Isbin’s range of colour…masterfully... — BBC Music Magazine, January 2018, 5 out of 5 stars More…

ALMA ESPAÑOLA presents Grammy Award-winning singer Isabel Leonard alongside Grammy Award-winning guitarist Sharon Isbin in an all-Spanish recording for voice and guitar, including twelve arrangements by Ms. Isbin in premiere recordings. Duos by Federico García Lorca, Manuel de Falla, Xavier Montsalvatge, Agustín Lara and Joaquín Rodrigo, with guitar solos by Granados and Tárrega, are heard in performances that evoke the rich and magnificent tradition of Spain. The Philadelphia Inquirer described Leonard & Isbin's performance as 'Feasts of beautifully sculpted phrases... glimpses of heaven', and The New York Times referred to the 'Soulful depth' of their interpretations. The collaboration of Isabel Leonard and Sharon Isbin brings together one of today's brightest vocal stars, heard on the stages of the Metropolitan Opera, Vienna State Opera, and Paris Opera, with a guitar virtuoso acclaimed as 'the pre-eminent guitarist of our time'.

Voice and guitar may be a natural combination for the passions and colours of Spanish song, but rarely have they sounded as vivaciously, seductively idiomatic on disc…Isbin’s range of colour…masterfully matches the twists and turns of Leonard’s bewitching voice…This is an absolute joy.

Leonard's tangy lyric mezzo has just the right sort of smokiness in the middle and lower registers to bring these songs by Lorca, Granados, Falla, Rodrigo and Montsalvatge to smouldering life - an entrancing 'heure espagnol' indeed.