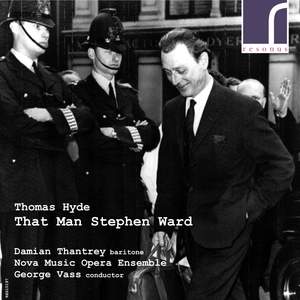 Not so much a polemic as an ironic, if desperately sad portrait of the man himself...Thantrey gives a powerhouse performance as Ward, wonderfully sustaining his cut-glass pronunciation, and impeccably... — Gramophone Magazine, Awards Issue 2017 More…

The Profumo Affair is one of the most notorious of British political scandals. It ultimately contributed to the end of both a prime ministerial career and a Conservative government, as well as creating a security risk with a Russian diplomat at the height of the Cold War. Composer Thomas Hyde and librettist David Norris explore this extraordinary tale from the point of view of Stephen Ward, the unfortunate society osteopath who served as a scapegoat for his prominent 'friends' at the root of this infamous affair in a captivating one-man opera, That Man Stephen Ward. Taking on the role of Ward, baritone Damian Thantrey is joined by renowned conductor George Vass and his superb Nova Music Opera Ensemble in this world premiere recording.

Not so much a polemic as an ironic, if desperately sad portrait of the man himself...Thantrey gives a powerhouse performance as Ward, wonderfully sustaining his cut-glass pronunciation, and impeccably shifting voice and accent...It's a fascinating achievement, beautifully done.

George Vass conducts the six- piece Nova Music Opera Ensemble with nimble agility and a lightness of touch perfectly in keeping with Hyde’s economic but eloquent score. The recourses sound is excellent and the booklet includes synopsis, libretto and a useful profile of Ward.

The opera has an immediate impact and is well- served by this excellent recording.

Hyde is honoured by a performance of breath-taking compulsion from Damian Thantrey and played superbly under George Vass. The complete libretto is included…just buy it.