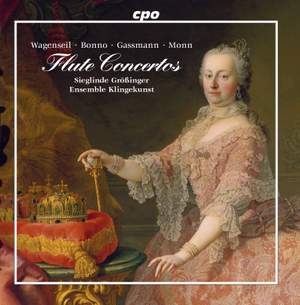 CPO's first collaborative project with Klingekunst and the ensemble’s soloist and leader Sieglinde Größinger presents CD premiere recordings of the earliest Viennese flute concertos, which date from the reign of Empress Maria Theresa. The selected concertos by Georg Christoph Wagenseil, Giuseppe Bonno, Florian Leopold Gassmann, and Matthias Georg Monn, heard here on historical instruments, represent a significant contribution to the artistic recovery of the forgotten Viennese music culture of this epoch, a field that is only beginning to be researched. When Emperor Carl VI died in 1740, his successor Maria Theresa inherited a state budget burdened by heavy deficits. Forced to adopt economic measures, the new Empress suspended the operation of the court orchestra and then offered its services to interested parties. However, the artistically marginalized musicians did not accept defeat when these unexpected developments put them in an existentially precarious position. No longer obliged to serve and obey a court aesthetic, they delighted in experimentation with new styles and forms of expression. The revolutionary character of these exciting times very much may be viewed as preparation for the Viennese classical period. Moreover, the flute now became a solo instrument for use in the orchestra and concert performances. Until about 1740 it was only rarely employed and then merely for additional tone colour, but now it first enjoyed its share of spotlight.