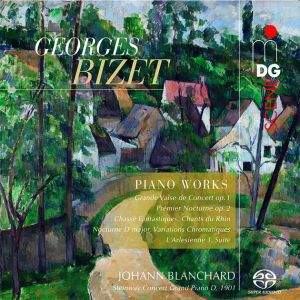 Carmen made Georges Bizet world famous, but he lived only a few months to enjoy the overwhelming success of this opera depicting love and jealousy among hot-blooded Spaniards. A swim in the cold Seine did him in!

Today hardly anybody remembers that Bizet also composed piano music. To our good fortune, Johann Blanchard's inventory of his rarities cabinet has yielded more new discoveries that will make the hearts of music lovers beat faster - while the latest SACD technology will have the same effect on those of audiophiles.

Bizet's piano works place considerable technical demands on the pianist but Johann Blanchard naturally rises to the challenge on this discovery disc which complement his debut featuring works by Cécile Chaminade.