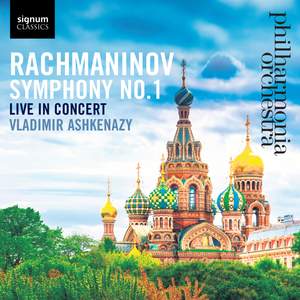 Perhaps the most satisfying of all [Ashkenazy’s recordings of the Symphony]…Perhaps the real strength of Ashkenazy’s interpretation lies not so much in its deeply felt emotional intensity, but... — BBC Music Magazine, December 2017, More…

Interview,  Vladimir Ashkenazy on Rachmaninov and the Philharmonia

As the first instalment of a new symphonic cycle is released on Signum, the great pianist and conductor talks to Katherine about a composer and orchestra which have played a seminal role in his career.

Marking their latest collaboration with their conductor laureate Vladimir Ashkenazy, the Philharmonia return to disc with a stellar live-performance of Rachmaninov’s volcanic Symphony No.1 in D Minor. Composed when Rachmaninov was just 22, the work has a famously tumultuous performance history. The work’s premiere in 1897 – conducted by Glazunov – was a disaster, generating vitriolic abuse from critics and reviewers of the day. Rachmaninov destroyed the score and refused the works publication during his lifetime; it was not heard again until its reconstruction from solo parts by Soviet Musicologists for a concert in 1945.

This is the first release in a new series of Rachmaninov’s symphonies, conducted by Vladimir Ashkenazy in live performances with the Philharmonia Orchestra.

Perhaps the most satisfying of all [Ashkenazy’s recordings of the Symphony]…Perhaps the real strength of Ashkenazy’s interpretation lies not so much in its deeply felt emotional intensity, but rather in the way he brings a sense of architectural integrity to music that in lesser hands can seem episodic and discursive.

In the absence of a major interpretative rethink, the strings swell and swirl with what feels like idiomatic fervour and the brass-playing is enthusiastic. There’s no suggestion that the special bond between this conductor, his orchestra and his audience has atrophied over time…in what was then his 79th year, he has given us a persuasive souvenir of his live music-making.

The Philharmonia sound warm and weighty – terrific brass, timps and tam-tam – and they respond with alacrity to Ashkenazy’s firm, unfussy direction

Ashkenazy knows how to shape detail and soar in the big melodic moments. The Philharmonia sound is muscular and alert, from the opening woodwind solos to the mighty, stirring symphonic tutti of the finale. A short (43.23 min) but absorbing disc.

A dark and smouldering first instalment...The playing of the Philharmonia is elegant in the more relaxed moments... the latter part of the finale is suitably thrilling.