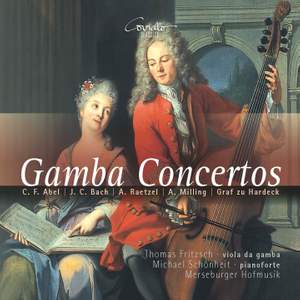 Raetzel: Concerto in A major

The viola da gamba is generally regarded as a chamber music instrument, which rarely seeks the accompaniment of an orchestra, but apparently this was more common than one assumes nowadays. The discovery of four hitherto unknown gamba concerts in the music library of the Eleonore von Munster (1734-1794) at Ledenburg Castle is a special stroke of luck, for one of the four works is by Carl Friedrich Abel, whose concerts have so far been considered lost. On this latest Coviello Classics record Thomas Fritzsch and the Merseburger Hofmusik play gamba concerts of Abel, J.C. Bach, Raetzel and others.