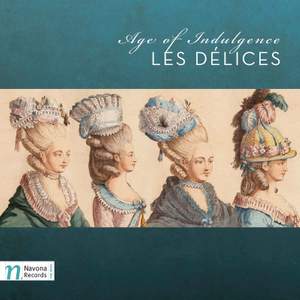 On their Navona debut Age of Indulgence, early music ensemble Les Delices presents an exquisite compendium of unique and rare instrumental music from the last generation of French Baroque composers. The album's repertoire shines a spotlight on lesser-known - yet powerfully skilled - composers active in the most important circles of mid- and late-eighteenth century Parisian musical society. The instrumental works on the album are elegantly detailed with many of the dominant French and European musical ideas of the era, including several of the genres that lay at teh core of Baroque music. Conveyed in the immaculate performances of Les Delices' acclaimed instrumentalists, Age of Indulgence is a sophisticated look back to a rich crossroads in the history of French music. Echoing the spirit of chamber arrangements of excerpts from Jean-Philippe Rameau's operas, Age of Indulgence presents adapted selections from the composer's operatic oeuvre with Extraits d'operas. The ensemble's arrangements include selections from Rameau's Les Fetes de l'Hymen, the 1744-version of Dardanus and Les Boreades. Though Les Boreades was never produced in the 18th century, the surviving score contains remarkable music and suggests a fanciful staging. Its Entree de Polymnie replete with cascades of flowing scales and layered suspensions that approach the sublime. Age of Indulgence provides snapshots for the most important trends in French composition in the eighteenth century. We hear the unique characteristics of the French Baroque, namely lush harmonies, and ornate melodic embellishments, as well as intricate counterpoint and virtuosic instrumental writing suggestive of German and Italian trends, respectively. The album's works are made mroe poignant when one considers the composers on the album were among the final generation of Baroque composers. Their music pays tribute not only to earlier generations of French artists, but also bids farewell to the Baroque Era itself.