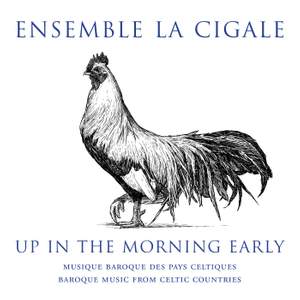 Up in the Morning Early

trad.: The Berks of Endermay

McGibbon: Up in the Morning Early

McGibbon: The Bonniest Lass in a' the World

Jones, E: The Rising of the Lark

Well before the Nationalist schools of the nineteenth century, Celtic music in general, and Scots tunes in particular, enjoyed a period of great popularity throughout Great Britain. Composers trained in the Italian art music of the time borrowed traditional Celtic melodies and used them to create musical hybrids which owed as much to the ornamental stylings of Corelli as to the fiddle and lute traditions of Scotland. Strangely, the actual Celtic composers, arrangers and publishers of the period, many of whom synthesized the traditional idioms of their native culture with real flair and affection, are often overlooked in explorations of what was dubbed the “Scots drawing room style” by the eighteenth-century music publisher James Johnson. The aim of this release is to draw the attention back to these overlooked composers, which include James Oswald, General John Reid, Thomas Baltzar, and others. Montreal Ensemble La Cigale specializes in music of the Renaissance and Baroque eras on period instruments.