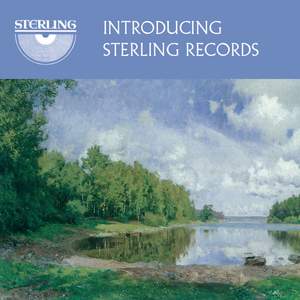 This release is a compilation of some of the best music in the Sterling Records library. Sterling is a Swedish-owned record label of more than 150 titles specializing in orchestral music from the Romantic era. It was founded by Bo Hyttner in 1980. Most of the albums released by Sterling contain previously unrecorded works. Alongside the main series of Romantic Orchestral classics, Sterling also publishes an Artist series, dedicated to musical excellence from Swedish performers, and a Historical Recordings series sourced from the Swedish Radio Archives. Bo Hyttner writes of this release: “By the mid-nineteenth century orchestral music had evolved into a large and diverse entity, composers created their own musical styles incorporating regional folk songs and traditional melodies in their work. Picturesque instruments, such as the harp, became regular members of the orchestra as Classical formalities dissolved in favor of ‘tone-poems.’ From the 1820s, for around 100 years, the Romantic style of orchestral writing was in continuous development by many hundreds of composers. Musical dictionaries report their names, and list their works, even so many have been forgotten or even lost. Perhaps not all of them were individual enough to keep a place in the repertoire. Perhaps some lived at time, and in a place, where music was not fully appreciated… I hope that by experiencing this sample taken from our Sterling catalogue you will be able to grasp the enormity of this lesser known musical treasure trove. In my mind all of this music is worth preserving as it forms a vital part of our musical heritage. I also believe that this music contains great beauty whilst also reflecting each country’s cultural development and history.”