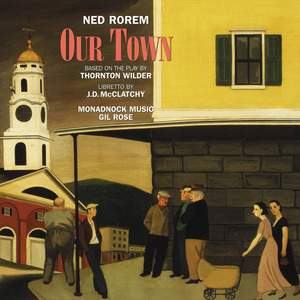 The playing of the chamber orchestra is alert, the small chorus produces pleasingly blended tone, and the cast – led by the flexible tenor Matthew DiBattista as the narrating Stage Manager –... — BBC Music Magazine, December 2017, 4 out of 5 stars More…

"What a Lot of Beans"

"It's Evening Now in Grover's Corners"

"Oh George, Can You Come Down a Minute?"

"Can You Get Home Safe, Louella?"

"Emily! Are You Still There?"

"Morning, Everybody! Only Five More Hours to Live"

"Thank You, Thank You. I Have Another Question Here"

"Emily, Can I Carry Your Books Home for You?"

"These Are So Expensive"

"And Now We'll Get On With the Wedding"

"This Time Nine Years Have Gone By, Friends"

"We're All Coming Up Here"

"Little Cooler Than it Was"

"Look! There's the Church Where I Got Married!"

"Were You Happy, Emily?"

"Most Everyone's Asleep in Grover's Corners"

This is the world-premiere recording of Ned Rorem's (b. 1923) acclaimed setting of Thornton Wilder's Our Town, one of the best-known plays of the 20th century and a staple of every US household.

Intended from the start to be a chamber opera, the orchestration is small, and the scoring is light and transparent throughout, consistent with a work best suited to young voices. Rorem moves in and out of speech and utilises more elevated recitative (parlando) than in his previous theatrical works. He manifests Wilder's 'emotional shyness' with abrupt stylistic cross-cutting between Americana (Thomsonian faux-Protestant hymns, plush sustained cinematic strings, Copland-esque woodwind solos, Ivesian collages), transatlantic modernism (the tartly-scored 'sting' chords, jagged, off-kilter ostinatos in close-canon, denatured melodic fragments in place of memorable tunes), and Gallic lyricism (rapturous string obbligatos, sudden snatches of emotionally-vibrant melody, Debussy-esque orchestration). Everywhere in the music there is a sort of cool, self-contained regretfulness, the regret so central to the play's initial impetus, a regret so intense as to border on dread, that perfectly underpins and undercuts the sentimentality of the portraits.

Rorem believes that Satie's Socrate may be 'the greatest of all operas.' Certainly, he exploits in his score for Our Town the same kind of baroque cantata textures and effects as Satie did in his 1920 masterpiece. But the Rorem and McClatchy Our Town also contains in the propulsive, off-kilter ostinati percolating uneasily beneath the Nantucket matter-of-factness of its musical surfaces and its stubborn unwillingness to wear its heart on its sleeve, an astonishing undercurrent of unanticipated, and highly effective dramaturgical fury.

The playing of the chamber orchestra is alert, the small chorus produces pleasingly blended tone, and the cast – led by the flexible tenor Matthew DiBattista as the narrating Stage Manager – deliver words and pitches with clarity and accuracy…[Rood’s] instinctive musicality, pure tone and radiant upper register are reminiscent of the young Dawn Upshaw.

Only in the third act, with an aria for the central female character, Emily, placed just minutes before the end of the drama, does Rorem’s full lyrical gift get free rein…Margot Rood delivers it with ease, with both sweetness and regret…as her romantic partner, tenor Brendan Buckley sings with a light, pliant voice that works well with Rood’s more assertive instrument.