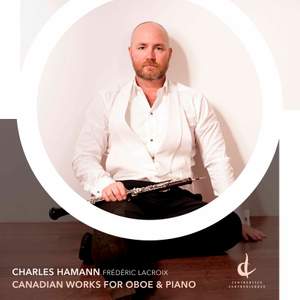 Sonata breve No. 4: I. Moderato

Shizen (3 Nature Sketches from Japan): No. 1, Wind in the Pines

Shizen (3 Nature Sketches from Japan): No. 3, The Temple Festival

Twitter Études No. 2: V. Why I Love the Oboe

Sonatine for Oboe & Piano: I. Lent

Sonatine for Oboe & Piano: II. Scherzando, as Jazzy as Possible, but Not Too Fast

Canadian Works for Oboe and Piano is a sweeping compilation of fine Canadian repertoire for oboe and piano from the past 70 years. A celebration in honor of Canada’s sesquicentennial, the collection highlights the oboe’s personal, singing quality and is unified by the lyrical essence of all the works. This recording includes several Canadian oboe classics, three new works created especially for this project, three new arrangements of existing pieces, and a few interesting discoveries, including the world premiere of a work written some 40 years ago by a major composer but never performed live. The album features an even mix of sonatas, shorter stand-alone works, and what could be considered suites. With one exception, all the works on these discs are receiving their first recorded performances here. Charles “Chip” Hamann is principal oboe of Canada’s National Arts Centre Orchestra and adjunct professor of oboe at the University of Ottawa School of Music. He is a frequent guest principal oboe of some of the world’s finest ensembles, including the Chicago Symphony Orchestra, the Royal Philharmonic Orchestra, and Québec’s Les Violons du Roy. Mr. Hamann’s 2010 recording of the Saint-Saëns Oboe Sonata with pianist Stéphane Lemelin on Naxos received the Critic’s Choice award by Gramophone Magazine. He is also heard as soloist with the National Arts Centre Orchestra and violinist Pinchas Zukerman in the Bach Concerto for oboe and violin, BWV 1060 on the 2016 Baroque Treasury album for Analekta. Pianist Frédéric Lacroix is a member of the University of Ottawa School of Music piano and composition faculty and has been heard as a soloist, chamber musician and collaborative pianist throughout North America, Europe and Asia. He is a specialist in the study and performance of keyboard music on period instruments, particularly the fortepiano.