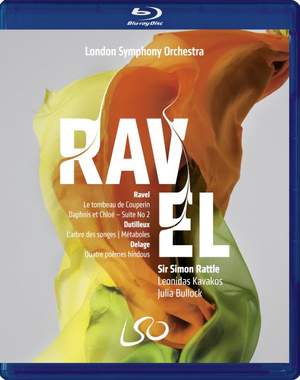 In seeing as well as hearing this concert, what comes over is Rattle's love for the music and the orchestra's wholehearted response: it all looks so terribly easy, though of course it's anything... — BBC Music Magazine, October 2017, 5 out of 5 stars More…

LSO Live has been filming concerts in the Orchestra’s Barbican home since 2012 and we’re proud to bring these acclaimed performances to DVD & Blu-ray for the first time. Recorded in January 2016, this beautiful programme of French music was chosen by Music Director Designate Sir Simon Rattle and features world class soloists Leonidas Kavakos and Julia Bullock.

Book-ending this concert are two works by the master of orchestral texture, Maurice Ravel. First, Le tombeau de Couperin; an expertly orchestrated version of a 1914-17 piano piece that brings sharpness to the original’s classical dance rhythms. The work calls for an oboe soloist of virtuosic skill, which is expertly handled here by LSO Principal Olivier Stankiewicz. At the other end, Rattle closed the concert with the popular second suite from Daphnis et Chloé.

Following Stankiewicz’s display of woodwind mastery, violinist Leonidas Kavakos presents his intepretation of a modern classic, Henri Dutilleux’s violin concerto L’arbre des songes. Composed between 1983 and 1985, the title translates as ‘The Tree of Dreams’ and the work is based on a process of continual growth and renewal, as the composer explained: ‘All in all the piece grows somewhat like a tree, for the constant multiplication and renewal of its branches is the lyrical essence of the tree.’ Rattle also presents a second work by Dutilleux, 1964’s Métaboles. Written for George Szell and the Cleveland Orchestra, it is a diverse sequence of orchestral études given symphonic coherence by stealthy motivic evolution.

Rounding out the programme, American soprano Julia Bullock shines in Maurice Delage’s Quatre poèmes hindous. Written in 1912 for a chamber ensemble of two flutes, oboe, two clarinets, harp, and string quartet, this hidden gem has been described as ‘one of the first attempts to introduce the melodic and rhythmic forms of Indian music to the language of Western music’.

In seeing as well as hearing this concert, what comes over is Rattle's love for the music and the orchestra's wholehearted response: it all looks so terribly easy, though of course it's anything but. Which is not to say that drama and tension are downplayed. Even in Le tombeau de Couperin...Rattle explores its mysterious corners with the softest, most ethereal sounds from the string section.

Rattle’s affectionate account of Le tombeau de Couperin features pristine contributions from the LSO’s principal woodwind team. Smiles abound and Rattle seems to offer his players a great deal of freedom in shaping and phrasing...The gems at the heart of this programme, though, are the Quatre Poèmes hindous...Rich sound and crystalline picture quality make this an enjoyable viewing experience.