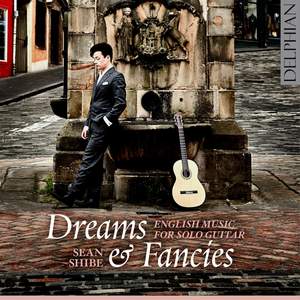 Shibe performs with superb artistry some of the now classics that Bream inspired...Prime in any such catalogue is Britten's 1963 Nocturnal after John Dowland, and Shibe gathers the listener into... — BBC Music Magazine, October 2017, 5 out of 5 stars More…

David talks to the guitarist about his debut disc of English music for guitar, out on July 21st on Delphian.

Barely half a century ago, the guitar was such a rarity in the concert hall that even an outstanding player like Julian Bream was remarkable as a pioneer as much as for his exceptional technique and musicality. Today, by contrast, the field is richly populated – thanks not only to Bream’s own inspiring example to younger players but also to the vastly increased repertoire, so much of which he also instigated.

Yet even in this new heyday for the instrument, Sean Shibe – whose full album debut here nests among four of those Bream-commissioned works a clutch of Dowland pieces from a previous Elizabethan Golden Age – stands out as a truly uncommon talent. ‘I want to hear his interpretation of Britten’s Nocturnal over and over,’ wrote David Nice in an awed recent concert review. ‘This, for me, is the definitive performance.’ Born in Edinburgh, in 2012 Shibe became the first guitarist to be selected for the BBC Radio 3 New Generation Artists scheme, and the only solo guitarist to be awarded a Borletti-Buitoni Trust Fellowship. He was selected by Young Classical Artists Trust (London) in 2015.

Shibe performs with superb artistry some of the now classics that Bream inspired...Prime in any such catalogue is Britten's 1963 Nocturnal after John Dowland, and Shibe gathers the listener into its unsettling, fantastical soundworld with an intensity that combines gracefulness and threat with rapier skill...[Shibe] movingly navigates that peculiarly English fine line between whimsy and melancholic vision.

Shibe is another Bream, or something close. His playing unites finesse and poetry, and beautifully suggests a continuity of idiom.

Everything here is rich in melody and Shibe is as articulate a virtuoso as Bream, communicating the precision of these intimate chamber pieces with real passion ... unmissable.

Shibe has already secured a formidable reputation in both concert and on record. This latest disc plays very much to his strengths: the technical challenges thrown at him (by non-player composers) are easily surmounted, and his sound is beautifully captured.

the association with [Bream is] wholly flattering to the 25-year-old Shibe, who reveals himself here as a musician of considerable intelligence possessed of impressive technical resources. He proves himself nimble and well-proportioned in William Walton’s Five Bagatelles.

It's not often a guitar recital leaves me slightly stunned, but this one did. Just listen to the sound, the way Shibe changes the colour even during a phrase...If you only by one guitar recital this year - it's called Dreams & Fancies.