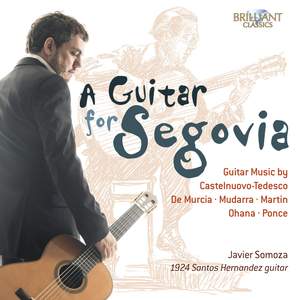 A Guitar For Segovia

The concept of this CD is inspired by two sources: the works are based on the harmonic pattern of “La Follia”, a characteristic Spanish Dance, and, secondly, the guitar that belonged to Andrés Segovia and was built in 1924 by the famous luthier Santos Hernández, and donated by the maestro to the Victor Espinos Music Library in Madrid. Segovia is known to have played the instrument extensively, on several world tours.

Javier Somoza is one of the foremost guitarist of Spain. After winning several international guitar competitions he embarked on a brilliant solo career. Next to that he is Professor at the Real Conservatorio Superior de Musica in Madrid and Honorary member of the Segovia Guitar Academy.