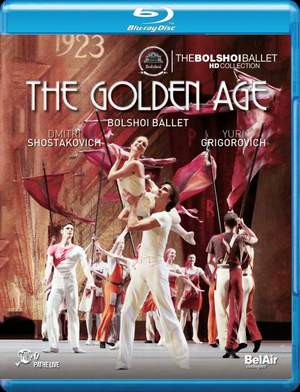 This modern and visionary work, set to music by Dmitri Shostakovich, was created in 1930. Its central theme was the highly battle and subsequent triumph of the proletariat against the decadent bourgeoisie, set in Europe during the Roaring Twenties. Surprisingly, the score by Dmitri Shostakovich raised political controversies, possibly because it took inspiration from European dance forms (and was openly inspired by jazz music) and consequently, the ballet vanished from the theaters until 1982, when Yuri Grigorovich restaged it with sets by Simon Virsaladze and a completely new libretto mainly revolving around the love story between Rita, a cabaret dancer, and Boris, a young idealist. The conflict in the original production was also recast as a clash between fishermen – the morally superior workers – and society’s criminal elements.

Bringing back The Golden Age in Autumn 2016, a few months prior to Yuri Grigorovich’s 90th birthday, was a highly symbolic choice for the Bolshoi Ballet: this work, the last Grigorovich would ever choreograph for his company, hadn’t been staged for almost 10 years. A rare and refined ballet, which ran the risk of falling into oblivion twice, is danced by the new generation of the Bolshoi Ballet, including Nina Kaptsova and Mikhail Lobukhin.