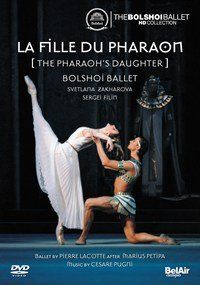 Directed for video by Denis Caïozzi

BelAir Classiques present Petipa’s extravaganza, The Pharaoh’s Daughter, in a stunning production by Pierre Lacotte. Recreating the spectacular sumptuousness of the original, the ballet tells the tale of a young Englishman who dreams he elopes with a Pharaoh’s daughter. Despite a desert storm, a lion hunt and an attempted suicide, the couple finally wins the Pharaoh’s blessing of their marriage. From its creation in 1862, Petipa’s grandiose ballet was a sensational success; its stupendous costumes and striking scenery, its exotica, romanticism and drama appealing to audiences as much as the virtuoso choreography.

The Bolshoi Ballet and the two soloists Svetlana Zakharova and Sergueï Filin are at their best in spite of the difficulty of Pierre Lacotte’s choreography.