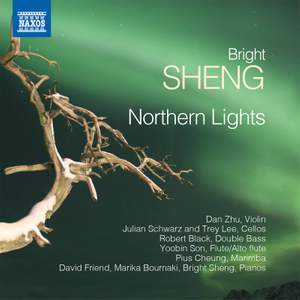 Sheng: Melodies of a Flute

Melodies of a Flute: I. Flute and Phoenix

Acclaimed Chinese/American composer Bright Sheng has been fascinated by folk music for his entire career and Northern Lights is his first work to use Scandinavian folk music, exploring its kinship with American sources such as Appalachian and Bluegrass music. Inspired by ancient Chinese poetry, Melodies of a Flute captures deep and sensuous moods of love and longing, while Hot Pepper refers to the spicy cuisine of Si Chuan province. Bright Sheng combines Chinese and Western musical ideas to create luminous, deeply expressive and rhythmic scores, giving new meaning to the idea of music as a universal language.