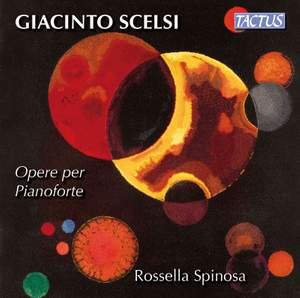 he sensitively sophisticated pianist Rossella Spinosa faces up to the the difficult task of performing the music by Giacinto Scelsi, a very special composer that grew within the Parisian scene influenced by: Debussy, the generation of the Eighties, the Dodecafonia of the German school, and the esotericism of Skriabin, reaching (after traveling to the east in India and Tibet) his very personal idea of global spherical sound. So Scelsi became the interpreter of a new concept of sound that transcends the formal architecture, becoming a link between the earthly world and cosmic forces. The result is music that demands great understanding and feeling by both the performer and the listener; a total immersion in the sound and vibrations of the world of Giacinto Scelsi.

The two works here, the Quattro Illustrazioni and the Suite No 9, “Ttai”, display...postmodernist traits, yet they’re strangely alluring, and Spinosa proves a highly convincing interpreter.