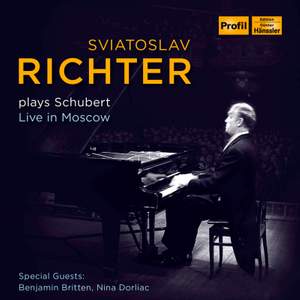 That the whole set is devoted to Schubert is interesting in itself. It shows that performances of Schubert’s sonatas, which are so well known from recordings of Richter’s later recitals, were... — The Guardian, 9th August 2017, 4 out of 5 stars More…

The present Edition of Richter’s Schubert interpretations from 1948 to 1964 has some CD premieres to offer, taken from hitherto unreleased live recordings. One is the two movement version of the Piano Sonata no. 6 in E minor D566. The Moscow live recording from 1958 also shows that Richter is one of the very few pianists of note to have played both versions, the other being in three movements. That also applies to the shortened (Urtext) and full (ed. Brahms) versions of Impromptu no. 1 D946 and the largely unknown original version of the third Impromptu of D899 (in G major) and the popular version in G flat. Then there is the never officially published recording of the unfinished Sonata no. 15 D840, nicknamed 'Reliquie' in the mistaken belief that it was Schubert’s last sonata.

Schubert was a true lieder composer, and his piano works too have song-like character. This Edition accordingly includes Sviatoslav Richter 'accompanying' at the piano. The six Schubert songs recorded in 1953 and sung – in Russian – by his lifelong companion, soprano Nina Dorliac, are a genuine rarity. The same CD (no. 9 of this Edition) features another fine example of Richter the great solo artist as a team player, joining composer Benjamin Britten (1913-1976) in the Eight Variations in A flat D813 for piano duet.

That the whole set is devoted to Schubert is interesting in itself. It shows that performances of Schubert’s sonatas, which are so well known from recordings of Richter’s later recitals, were always a major element in his programmes...As these performances show, Richter clearly felt a special affinity for this often introspective music...For Richter devotees it has to be a compulsory purchase.

Notable additions to the Richter catalogue.