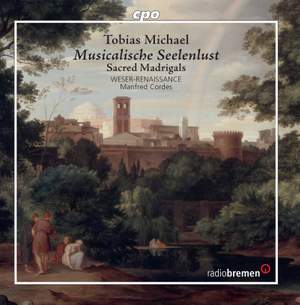 Tobias Michael succeeded Johann Hermann Schein as the Music Director at the St. Thomas School in Leipzig in 1631, and Sebastian Knüpfer was Michael’s successor in this post in 1657. Many different kinds of parallel developments occurred in the life stories of Schein and his direct successor Michael; the former exercised a model function in the latter’s music, and there were documented contacts involving collegial exchange. Michael’s extant oeuvre includes two volumes of motets and sacred concertos entitled Musicalische Seelenlust (1634-37), from which a selection is heard on this CD. Their style corresponds to that of the Venetian school then very widespread in Germany, and they are presented here in renderings by seasoned interpreters the WESER-RENAISSANCE led by Manfred Cordes. We have the St. Thomas music directors, who were obliged to archive the school’s score materials, to thank for the fact that even today we are able to gain insights into the repertoire of this centuries-old institution. When Kuhnau exercised this office in the early eighteenth century, he was familiar with many an older collection that continues to exist today and can be put to practical use. These works include Schein’s Israelis Brünnlein, Michael’s Musicalische Seelenlust, and the Florilegium Portense by Calvisius/Bodenschatz.