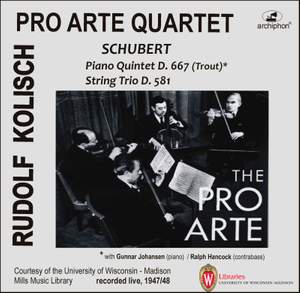 Historical recordings with the famous Pro Arte Quartet, worldwide renown in the pre-war years. Its leader Alphonse Onnou died in 1940, and in 1944 Rudolf Kolisch (1st violin) became its new leader until 1961. With his own Kolisch Quartet he, already in the 1930s, had developed a new interpretative style , inspired by Arnold Schoenberg, his brother in law. This archiphon series of previously unissued radio recordings, made at the University of Wisconsin, Madison, offers unique historical documents of chamber music playing.