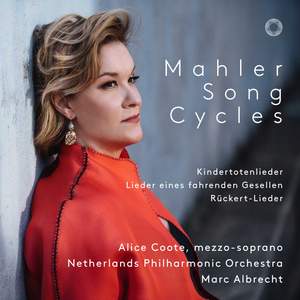 A mezzo can bring so many colours to the expression, and in that respect Alice Coote matches the previously unsurpassable challenge of Janet Baker with Barbirolli. There’s even a plus: the height,... — BBC Music Magazine, November 2017, 5 out of 5 stars More…

Richly lyrical, poignant and soul searching, Mahler’s orchestral songs deal with the familiar themes of love, life, resignation and loss, exquisitely realised on an orchestral canvas which combines haunting and compelling sonorities with strident, unsettling dissonances. While not as ambitious as his symphonies, they are as deeply-felt and often regarded as the key to the larger-scale works.

The eloquent sadness of the Kindertotenlieder is expressed though the rather bare orchestration and the entrancing use of solo instruments, culminating in a blissfully serene conclusion. With Lieder eines fahrenden Gesellen, the restless mood swings are matched with fluctuating, vividly textured orchestral colours. And for the most lyrical song cycle, the Rückert-Lieder, the delicately woven orchestral textures are ravishing in their effect, especially in the incomparable Ich bin der Welt abhanden gekommen, a song of which Mahler said “It is truly me”.

“What makes Albrecht’s Mahler so unique? His approach has integrity, is intelligent and sensitive … Albrecht leads the Mahler that makes you love Mahler.” (NRC Handelsblad).

Marc Albrecht is Music Director of the Netherlands Philharmonic, the Netherlands Chamber Orchestra and the Dutch National Opera. Acclaimed for his interpretations of Wagner, Strauss and Mahler, as well as for his commitment to contemporary music, Albrecht is a regular guest at Europe’s most prestigious opera houses and orchestras.

The world renowned mezzo-soprano Alice Coote is acclaimed for her performances of Strauss, Mahler, Berlioz, Mozart, Handel and Bach; she performs throughout the UK, Europe and the US and has a busy recital schedule.

The Guardian noted “Alice Coote's many admirers will be grateful to have her performance in Mahler’s great song-symphony documented in a carefully made studio recording [for PENTATONE], for she has emerged over the past few years as one of the finest mezzo interpreters of Das Lied von der Erde around … exquisitely coloured; every word matters, and the sadness that pervades the mezzo songs in particular is conveyed without it ever becoming self-conscious or sentimental.”

A mezzo can bring so many colours to the expression, and in that respect Alice Coote matches the previously unsurpassable challenge of Janet Baker with Barbirolli. There’s even a plus: the height, depth and naturalness of the typically superb Pentatone engineering highlight like no analogue recording ever could the perfect tonal match between the singer and the many vocal woodwind solos with which she has to mesh.

Her mezzo is rich and multicoloured, imbued with an intrinsic intensity and emotional complexity...In some ways, then, this disc presents the sort of performances one would expect: deeply personal, vocally idiosyncratic...It's not always beautiful...but there's never any doubting the emotional truth.

With conductor Marc Albrecht drawing eloquent playing by the Netherlands Philharmonic Orchestra, her performance has a focus that’s compelling, as well as all the individuality you’d expect. Higher up, she sounds full of light and warmth...but all her voice’s many facets are harnessed to convey meaning.