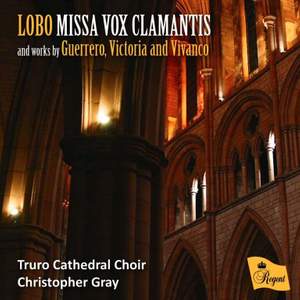 From the critically-acclaimed choir of Truro Cathedral, directed by Christopher Gray, of Spanish and Portuguese polyphony. The recording features works from the Golden Age of Renaissance polyphony, including two major mass settings by Victoria (Missa Simile est regnum coelorum) and Lobo (Missa Vox Clamantis), together with Guerrero’s motet on Simile est regnum coelorum, Vivanco’s large-scale eight-part setting of the Magnificat, and Victoria’s ever-popular motet O quam gloriosum. Recognised as one of the finest cathedral choirs in the UK, the Choir of Truro Cathedral have a growing discography promoting contemporary British composers, including discs of music by Philip Stopford (Do not be afraid, REGCD400), and Gabriel Jackson (Vox Clara, REGCD479 – Gramophone Editor’s Choice), as well as a disc to celebrate the 125th anniversary of the Cathedral, including many new commissions (Truro 125, REGCD422). Other recordings include ‘A Year at Truro’ (REGCD377), ‘Blow out ye Bugles’ – music from the time of the First World War (REGCD451), and a disc of music by Benjamin Britten (REGCD349). In 2016 a DVD and CD ‘The Story of Nine Lessons and Carols (REGDVD004) was released charting the origin of this famous service at Truro Cathedral in 1880.