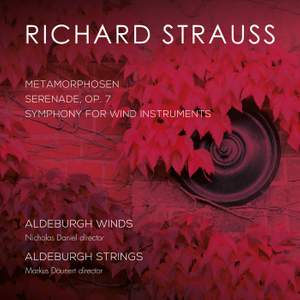 Oboist-director Nicholas Daniel negotiates tempos and dynamics so carefully, bittersweetness has its head here. I love the timely consolations of the clarinet family at the one at the end of... — BBC Music Magazine, September 2017, 4 out of 5 stars More…

Two super groups - the strings led by violinist Markus Däunert (leader of the Mahler Chamber Orchestra), and the winds led by oboeist Nicholas Daniel (whose distinguished career began with him being named BBC Young Musician of the Year) - combine in this, their second recording for Linn.

A counterpart to the Aldeburgh Strings course, whose recording of Britten’s Serenade for Tenor, Horn and Strings launched this partnership in 2016, Aldeburgh Winds offered an opportunity for exceptional wind and brass players to work intensively alongside leading international professionals.

Strauss poured out some of his most heartfelt inspiration in Metamorphosen, a 25-minute string masterpiece written as an elegy in the wake of Germany’s destruction in the Second World War.

In complete contrast the Serenade radiates Mozartian bonhomie combined with Strauss’s exquisite chamber scoring which provides a tantalising glimpse of the composer to come.

The Symphony for Wind Instruments (‘FröhlicheWerkstatt’) adds a third clarinet, basset horn and bass clarinet to the Serenade’s line-up and is very important work in the wind ensemble repertory.

The Aldeburgh Strings/Wind ensembles are a product of the Britten–Pears Young Artist Programme, founded over forty years ago by Britten and Pears, in order to provide high-level performance training for the world’s best emerging professional musicians.

Tutors are drawn from some of the world’s finest orchestras, such as the Berlin Philharmonic, Leipzig Gewandhaus, Philharmonia and Scottish Chamber Orchestra, and direct the ensemble sections from within, in an inspiring dual role of mentor and performer.

Oboist-director Nicholas Daniel negotiates tempos and dynamics so carefully, bittersweetness has its head here. I love the timely consolations of the clarinet family at the one at the end of the complicated first-movement development and in the third-movement trio. But high spirits also abound, and the final victory over depression is all the more impressive

Daniel's feeling for Strauss's long-range ebb and flow [in the Serenade] is one of the great attractions of this disc; you get the impression he's happy to oversee the general pacing and balance and then trust his players to do the rest. And rightly: they make a glorious sound.

[The Aldeburgh Strings] sound is lithe and rich, their trajectory isn’t thrown off course by every squall and they coalesce into broad, gutsy gestures when they want to. It’s a sophisticated performance. Strauss’s late wind ensemble pieces get similarly intelligent treatment from Aldeburgh Winds.