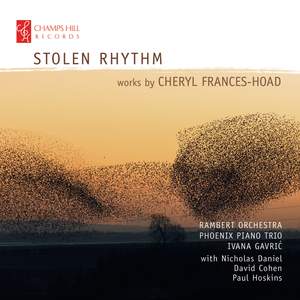 Production and recording values are invariably high from this source and the present issue continues this trend. I note that a previous Frances-Hoad chamber music issue The Glory Tree on Champs... — MusicWeb International, August 2017 More…

II. In the Dew

Frances-Hoad: A Refusal to Mourn

RPS Award-winning British composer Cheryl Frances-Hoad releases her fourth disc with Champs Hill Records, a compilation of chamber orchestral, chamber and solo piano works inspired by composers from the past. Cheryl Frances-Hoad explains the meaning behind the disc: 'Throughout my composing life I have found myself continually looking to composers from the past in order to create something new. This disc … is united by the theme of ‘homage’: each piece, although I hope clearly recognisable as my own, involved immersing myself in the language of another composer in order to write it.' Admired for her originality and fluency, Cheryl Frances-Hoad has been composing to commission since she was fifteen. Cheryl’s music has received critical acclaim, being described as 'like a declaration of faith in the eternal verities of composition' (The Times) with 'a voice overflowing not only with ideas, but also with the discipline and artistry necessary to harness them' (The Scotsman).

Production and recording values are invariably high from this source and the present issue continues this trend. I note that a previous Frances-Hoad chamber music issue The Glory Tree on Champs Hill was accorded Recording of the Month status - I have absolutely no hesitation affording the same courtesy to this superb disc.

one of the most distinctive voices in the well-stocked, thirtysomething generation of British composers...Frances-Hoad’s implicit trust in the expressive power of her melodic invention and harmonic thinking is paramount...That may seem to be an old-fashioned approach, but nothing in Frances-Hoad’s music ever sounds secondhand.