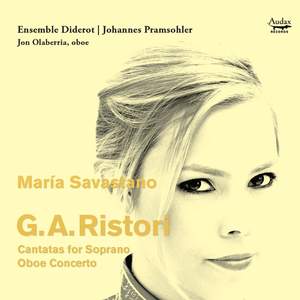 Each cantata invokes a feisty woman wracked by the torments of thwarted love…Savastano combines smouldering fury with sovereign presence…After all the anguished breast-beating, a genial oboe... — BBC Music Magazine, Christmas 2017, 4 out of 5 stars More…

We are proud to announce the next recording from this innovative, creative and critically acclaimed label, Audax Records. Johannes Pramsohler and his Ensemble Diderot rediscover yet again a completely forgotten composer: Giovanni Alberto Ristori, vice-“capellmeister” under Johann Adolf Hasse at the famed Dresden court.

The princess of Saxony wrote the libretti for three cantatas; three powerful monologues by three powerful women, masterfully set to music by Ristori: Dido, abandoned by her love and in complete despair, throws herself into the flames; Lavinia, forced to leave her fiancé tries to explain her action; Nice, taken by hallucinations accuses Cupid as being very unhelpful.

These three heroines are entrusted to the breathtaking vocal technique of an award winning soprano and to an ensemble that is setting new standards in the interpretation of baroque music.

Johannes Pramsohler describes soprano Maria Savastano as: "....world class and a huge discovery. This is a fabulous recording which I am extremely proud of: the world premiere of some breathtaking cantatas for Soprano and orchestra and an oboe concerto by Giovanni Alberto Ristori who was the deputy-kapellmeister to Hasse in Dresden. "

The brilliant oboe concerto will surely enter the repertoire of oboists everywhere.

María Savastano has been hailed by La Nación as “the new Argentinean promise of classical singing.” The remarkably versatile and expressive singer was a member of the Instituto Superior de Artes del Teatro Colón and of the Atelier lyrique de l’Opéra national de Paris.

Savastano handles everything with secure confidence and her soprano has a bright, silvery gleam that is appealing even if she seems unwilling to soften its edge for the more contemplative moments...we also hear Ristori’s E flat Oboe Concerto, with Jon Olaberria the sweet-toned, sunny soloist.