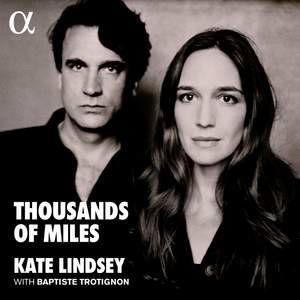 Here’s an opera-singer-goes-off-piste CD that’s unusually rewarding...Lindsey’s assimilation of the style sounds near effortless, and only occasionally does she give the feeling she has anything... — The Guardian, 15th June 2017, 4 out of 5 stars More…

Weill, K: Buddy on the Nightshift

The American mezzo talks to Katherine about her debut disc of Kurt Weill, Korngold, Zemlinsky and Alma Mahler, out now on Alpha.

Closing the distance between classical music and Broadway, between the old world and the new, this album is born out of a stunning encounter between two performers. Kate Lindsey is an opera star whose career is skyrocketing. She has stunned audiences with her performances of Mozart and Purcell, but grew up steeped in the music of Broadway, from Gershwin to Cole Porter. Baptiste Trotignon is a multie award-winning jazz pianist who plays with big names like Brad Mehldau or Tom Harrell, but who has a long-held interest in classical music, even composing a piano concerto for Nicholas Angelich. Together, they have produced a rich and varied programme around the songs of Kurt Weill, from Nanna's Lied to trouble Man, as well as the classics from The Threepenny Opera and Lost in the Stars. This journey through three European languages brings the listener to the very beginnings of jazz, and features all-new arrangements and deft improvisations by pianist Baptiste Trotignon. Lindsey and Trotignon also pay homage to three composers who, like Weill, all emigrated to the United States: Alma Mahler, Zemlinsky and Korngold. London-based American mezzo-soprano Kate Lindsey joins Alpha Classics for several recordings over the coming years.

Here’s an opera-singer-goes-off-piste CD that’s unusually rewarding...Lindsey’s assimilation of the style sounds near effortless, and only occasionally does she give the feeling she has anything to prove. The first song, Nanna’s Lied, has her voice turning on a sixpence from Weimar drawl to a Lieder-singer’s poise and back again.

Lindsey never sounds as if she’s dragging her voice anywhere it doesn’t want to go. She is incisive with text, in German and English alike...All told, Lindsey finds a lot more to Weill than just rasping dames in fishnet tights.

Lindsey shows just how nimble her voice can be with this diverse collection of 20th-century songs.

The range Kate Lindsey displays on her new disc Thousands of Miles is astonishingly varied. The recital is a brilliant Vienna Secession-meets-jazz-meets-Broadway programme of Weill, Zemlinsky and Korngold.

Heart-stoppingly beautiful. It's a superb recital of Weill songs.