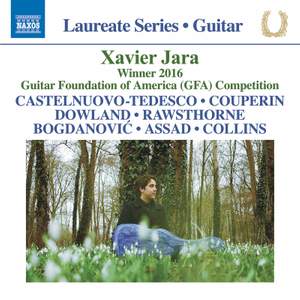 Sonata No. 3: I. Moderato appassionato

American classical guitarist Xavier Jara has taken first prize at numerous international competitions, including the prestigious 2016 GFA International Concert Artist Competition. This release stands out not only for the sheer musicality and technical brilliance of the performer, but for his imaginatively structured and adventurous programme. It balances the poetic beauty of John Dowland and Alan Rawthorne with the broad appeal of Castelnuovo-Tedesco’s Variations across the Centuries, technically challenging works by Dusan Bogdanovic, as well as intriguing discoveries such as young composer Jeremy Collins’s Elegy. A native of Minnesota, Xavier Jara was a student of Alan Johnston at the MacPhail Center for Music in Minneapolis until 2011 when he moved to Paris to study with Judicael Perroy for six years. During this time he completed his Bachelor’s Degree at the Conservatoire National Superieur de Musique de Paris where he also studied with the French guitarist Olivier Chassain, and the lutenist Eric Bellocq.