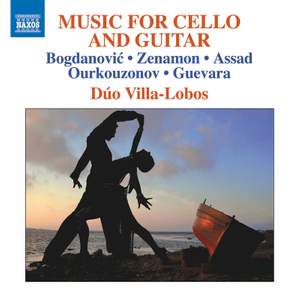 Music for Cello and Guitar

From South America and Eastern Europe

In recent years a number of composers have explored the tonal chemistry of timbre and texture offered by the ensemble of cello and guitar. The examples here, from South America and Eastern Europe, are among the most ambitious and technically demanding yet to have been written. Vivacious Latin-American rhythms, such as the Milonga and Chacarera, are explored by Edwin Guevara, while the Bulgarian Atanas Ourkouzounov creates an aura of indigenous folk culture in Tanzologia. Both lyricism and rhythmic dynamism suffuse Dusan Bogdanovic’s Quatre pieces intimes. The Venezuelan cellist, Cecilia Palma, and the Colombian guitarist, Edwin Guevara, formed the Duo Villa-Lobos in 2003 while at the Liceu Conservatory of Music in Barcelona. They have performed concerts in Europe and the United States and specialize in original music for guitar and cello duo. In 2017 they gave the world premiere performance and were the dedicatees of Gran Concierto Sinfonico, “La Madre Monte,” Op. 198 by Jaime Zenamon, with the University Philharmonia Orchestra at the hill Auditorium in Michigan. They have also received the prize for contemporary music at the Arjau Festival. Cecilia Palma is a member of the cello faculty at the Universidad Nacional de Colombia, and cellist of the Orquesta Filarmonica de Bogota. Edwin Guevara is a member of the guitar faculty at the Universidad Pedagogica Nacional de Colombia, and is a Knobloch Strings, Bermann Editions and Savino Music artist.