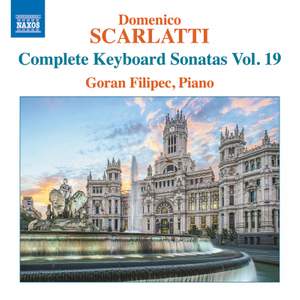 Alessandro Scarlatti was largely responsible for developing early Neapolitan opera but his son Domenico Journeyed to Lisbon and then to Madrid where he entered the service of the royal family. It was primarily for the Infanta Maria Barbara, who became Queen of Spain in 1746, that Domenico Scarlatti wrote his celebrated single-movement sonatas, some of the greatest pieces in eighteenth-century keyboard repertoire. This volume reveals Scarlatti’s evocations of Spanish dance rhythms, vivid exploration of color, scintillating scales and arpeggios and striking echo effects. Goran Filipec was born in Rijeka in 1981 and showed considerable early musical talent. After completing his studies in Croatia at the Academy Ino Mirkovich he continued at the Cologne Musikhochschule, the Moscow Tchaikovsky State Conservatory and at the Royal Conservatory in The Hague. His concert performances have led him to some of the most prestigious concert halls of Europe, including the Auditorium di Milano, The Mariinsky Theatre, the Budapest Bela Bartok National Concert Hall, and the Theatre du Chatelet, Paris. He is a laureate of several international piano competitions, including the Concorso Internzionale Franz Liszt- Premio Mario Zanfi (Italy), the Concurso de Piano Parnassos (Mexico), the Jose Iturbi International Music Competition (USA) and the Gabala International Piano Competition (Azerbaijan). His Naxos recording of Liszt’s Paganini Studies was awarded the Grand Prix du Disque of the Budapest Ferenc Liszt Society, previous winners of which have included Vladimir Horowitz, Gyorgy Cziffra, Alfred Brendel, Claudio Arrau, Zoltan Kocsis and Maurizio Pollini.