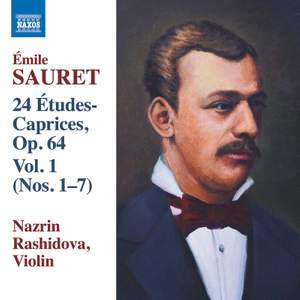 Nazrin Rashidova is at the peak of her technical and expressive range. Her liner-essay introduces each of these pieces in turn as well as giving necessary factual 'colour' around Sauret. — MusicWeb International, August 2017

A supreme virtuoso, the French violinist, composer and teacher Emile Sauret was acclaimed by the greatest musicians of the century, including Sarasate and Liszt. He wrote a series of charming genre pieces (available on Naxos 8.572366) but also a sequence of 24 Etudes-Caprices which marry virtuosity with every expressive opportunity available to the instrument. The result is one of the unsung but major cycles for solo violin spanning all twenty-four keys. The Azerbaijani-born British violin virtuoso, soloist, recitalist, chamber musician and orchestral director Nazrin Rashidova made her solo debut at the age of three in Baku and was awarded a gold medal by the Cairo Opera House for an exceptional violin recital three years later. Establishing FeMusa in 2008, Britain’s first female chamber orchestra in sixty years, is merely the latest in a series of achievements. She entered the Royal Academy of Music in London at the age of fifteen, where she had the privilege to play on a rare collection of violins by Antonio Stradivari. She studied with professors Erich Gruenberg, Felix Andrievsky and Lydia Mordkovitch. A prizewinner in several international competitions, she has appeared on international television and radio, played for royalty and other dignitaries, and has also performed in the US, Japan, Europe, and the Middle East.

Nazrin Rashidova is at the peak of her technical and expressive range. Her liner-essay introduces each of these pieces in turn as well as giving necessary factual 'colour' around Sauret.