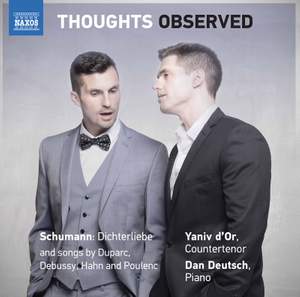 Most successful are the Poulenc items, especially the early cycle Le Bestiaire – heard in the composer’s own arrangement of the original for voice and ensemble – to which d’Or brings the appropriate... — BBC Music Magazine, October 2017, More…

Dichterliebe, Op. 48: No. 12, Am leuchtenden Sommermorgen

After exploring the music of his Sephardic ancestry on the acclaimed recording Latino Ladino (Naxos 857366), Yaniv d’Or brings a refreshing perspective to the Dichterliebe from Schumann’s proverbial ‘year of song.’ French songs of the 19th and 20th centuries offer d’Or’s exotic voice further dimensions in the floating harmonies of the young Duparc and Debussy, including Reynaldo Hahn’s beautiful Bach pastiche, and concluding with the classical simplicity of Poulenc’s first songs. The unique countertenor voice of Yaniv d’Or has confirmed his status as one of the rising stars of the modern international music scene. He studied at the Guildhall School of Music and Drama in London, receiving the International Vocal Art Institution Prize and the Gottesman Award. Making his debut as Tolomeo in Giulio Cesare for Gothenberg Opera, and at the Teatro dell’Opera di Roma as Elbas in Journey to the End of the Millennium by Bardanashvili, he received critical acclaim. Other roles include Artemis, Orfeo, Delfa, Melindo and Jehoyakim. He is currently collaborating with Drottningholms Slottsteater on a newly constructed opera of Salomone Rossi’s life. He has performed widely throughout Europe, has appeared in recital at Versailles Palace and regularly appears at Wigmore Hall. He is the recipient of a Gramophone Award for his album Liquefacta Est… with Ensemble NAYA on Naxos.

Most successful are the Poulenc items, especially the early cycle Le Bestiaire – heard in the composer’s own arrangement of the original for voice and ensemble – to which d’Or brings the appropriate element of boulevardier wit, and the simple eloquence of his interpretation of the Charles d’Orléans text, ‘Priez pour paix.’ Throughout, Dan Deutsch’s considered accompaniments are finely judged

Yaniv d’Or sings it with lovely tone…I’m looking forward to hearing Yaniv d’Or again, and I am convinced many readers will find a lot to admire in this programme.