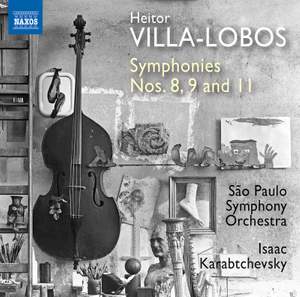 Karabtchevsky and his Sao Paulo forces drive through the thick and teeming turmoil with panache. But they also cherish the tender and thinner moments when Villa Lobos’s pulse slackens and lyricism... — BBC Music Magazine, October 2017, 3 out of 5 stars More…

Symphony No. 11: I. Allegro moderato

By the 1940s Heitor Villa-Lobos was widely recognized as Latin America’s greatest composer. Working in the United States gave him new perspectives, and his later symphonies move away from the folk influences and exotic effects of works written in the 1920s and 30s, such as the Bachianas Brasileiras, towards more concise, sometimes neo-classical, models. The Eighth and Nineth share a transparent lightness of touch while the Eleventh, described as a work of ‘immediate charm,’ is the perfect introduction to the later work of Villa-Lobos. Since its first concert in 1954 the Sao Paulo Symphony Orchestra has developed into one of today’s leading orchestras. An indispensable part of Sao Paulo and Brazillian culture that promotes deep cultural and social transformation, the orchestra has released over 60 recordings and has toured throughout Brazil, Latin Aerica, the United States, and Europe. In 2012 Marin Alsop was engaged as principal conductor, and in 2013 she was appointed music director. That same year the orchestra went on a fourth European tour, performing to great acclaim at the Salle Pleyel in Paris, the PHilharmonie in Berlin, and at the Royal Festival Hall in London.

Karabtchevsky and his Sao Paulo forces drive through the thick and teeming turmoil with panache. But they also cherish the tender and thinner moments when Villa Lobos’s pulse slackens and lyricism peeks through

The music is performed here with a freshness nourished by long and sensibly separated recording sessions. The sound benefits from a resonant concert space, one which the SPSO and Karabatchevsky must know intimately.

though there are hints of Stravinsky and even Roussel in some of the writing, there’s never anything derivative about it. Villa-Lobos always remain himself, whatever style he adopts or musical material he makes use of.