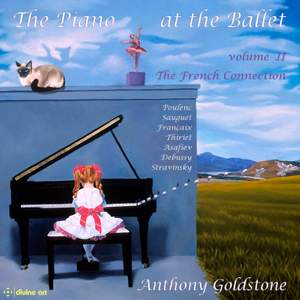 The Piano At The Ballet, Vol. 2

Sérénade (Version for Piano): I. Vif

Asafyev: The Flames of Paris (Version for Piano)

The Flames of Paris (Version for Piano): I. Introduction. Allegro moderato

The Flames of Paris (Version for Piano): IV. Coda. Allegro

Anthony Goldstone died on January 2, 2017 after a year-long battle with illness. This was his last recording, and is issued now also as a tribute and memorial to one of the greatest pianists of our age who never achieved the international recognition he deserved. His immense musical knowledge, assiduous research, and skillful artistry in both performance and also transcription brought him great acclaim in musicological circles. Following the critical praise and commercial success of ''Piano at the Ballet'' this sequel focuses on transcriptions of ballet music with French connections - through the composer or subject matter and includes both well known works and some refreshingly unfamiliar pieces, including program works by Debussy and Francaix later choreographed.