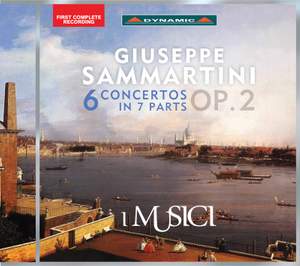 Concerto Grosso in A Major, Op. 2 No. 5: IV. Minuetto affetuoso

Sammartini’s first concerti grossi, those of his Op. 2, are considered to be among the composer’s masterpieces. These intensely inspired pieces, composed with such vigorous spirit, sometimes hardly seem to fit the measured form of the concerto grosso. Sammartini’s themes enjoy a pliant lyricism, at times melancholic, at others passionate and vehement. The contrapuntal development is always masterful, both learned and extraordinarily subtle in nature, taking unexpected and thoroughly expressive turns, often through refined chromaticism and an original use of harmony. The continuous, inexhaustible variety of Sammartini’s thematic invention leaves no room for predictable developments; it constantly introduces new elements, with often truly beautiful results. I Musici, founded in 1951, is the oldest chamber ensemble still active today. Over the years, they have become world-renowned for their promotion of 18th century Italian music, most notably Vivaldi and his Four Seasons, which they first recorded in 1959, and which has sold over 25 million copies in various editions, the last of which was for Dynamic in 2012.