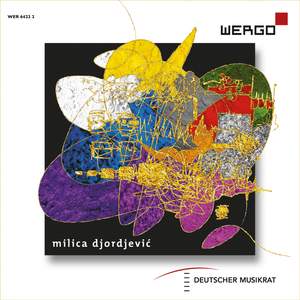 Djordjevic: the death of the star-knower - petrified echoes of an epitaph in a kicked crystal of time I&II

Djordjevic: how to evade?

Djordjevic: do you know how to bark? Non-communication for solo contrabass 2.1.1

Milica Djordjevic’s compositions are musical explorations, meticulous observations and dissections. Seven such investigations of sound are presented by the Serbian composer on her portrait album in the series EDITION ZEITGENÖSSISCHE MUSIK. Primarily, Djordjevic focuses on an extreme and exhaustive exploration of the musical material. In the booklet Barbara Eckle points out Djordjevic’s specific approach: "She develops a material component further and further in an increasingly large, loud and dense wave, distorting it, perverting it, multiplying it, squeezing out of it everything it has to give – until it implodes. The rupture is sudden and abrupt, as if the plug of an electronic appliance were ripped from a wall socket." Also essential for Djordjevic’s work is an interdisciplinary perspective, which is based on a diversified aesthetic socialisation, influencing her music in different ways. Each compositional process finally creates musical figures, which, at the same time, affect psyche and ratio. All pieces have been especially recorded at Deutschlandfunk in Cologne by internationally well-known interpreters such as Arditti Quartet, Ensemble Musikfabrik and Teodoro Anzellotti.