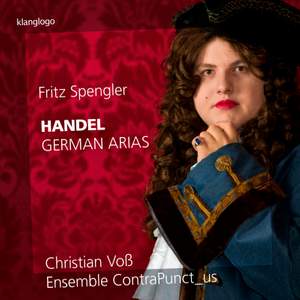 Balletto a 4 "Die Fechtschule": I. Aria I

Georg Frederic Handel was a true cosmopolitan: in Italy, he gained a familiarity with opera; in London, he himself stood in the limelight. Texts in Handel's native language, in contrast, feature only very sparsely within his oeuvre. Among these, the Neun Deutsche Arien are his last settings of German texts. Handel did not specify the instrumentation for these pieces, allowing modern-day performers to forge musical partnerships at their leisure: the inspiring cooperation between the young countertenor Fritz Spengler and the Baroque ensemble Contrapunctus has resulted in an album that aims to underline the importance of the German aria in the Baroque age. Text and merge unite their forces in order to live up to the heritage of Baroque music, merging into an inseparable whole. The violinist Johann Heinrich Schmelzer (1620-1680) also enjoyed great fame during his lifetime. His Musikalische Fechtschule is included on this disc in a spirited, fresh adaptation by the performers. Following this purely instrumental work, listeners encounter another Baroque master: Adam Krieger (1634-1666) who is said to have been ''the master of the new German Lied before Franz Schubert''. Before the aria genre rose to fame, convivial singing enabled the expression of communal experience, and Krieger created colorful depictions of this spirit of the people in his vibrant songs based on his own texts.